Time gets away from us

I find it hard to believe that it has been two years since I have posted at this site. I can see it does not get a whole lot of activity but, hopefully that will change this year. I have been working on my site Helicopters Of America and been busy with life's task, working, eating and sleeping LOL.

My boy has become interested in flying and I thought maybe I would post his progress. For anyone who thinks they would like to become a pilot some day I suggest you start reading up and about flight, how to fly, aerodynamics of flight and so on. This will help you get ready to start flying someday.

I remember picking up my first book on how to fly a helicopter when I was fourteen years old, and when I began my first flying lesson the knowledge I gain from those studies really came in handy.

So, I hope some of you will take a moment and post a thought or two, Perhaps you are just learning to fly, perhaps you have a question for the followers. Feel free to post here.

Happy Flying
Posted by Unknown at 10:10 AM No comments:

Feel Free to post. It is absolutely free to post with out an account. Just select anonymous and your post will be submitted for review then it will be posted. The reason for this is to ensure that spammers are not posting here and that your comments are acceptable to the subject matter at hand.

So to all the visit, if you do not have an account you can select under the comment block,"comment as" just scoll down to the bottom and select anonymous and your comment will be submitted and reviewed.


Thanks for your comments.
Posted by Unknown at 2:28 AM No comments:

Well, my love for aviation started when I was a young boy. I use to love to watch any and all helicopters fly. I was fascinated at this flying machine and hope that one day I too would be able to fly one.

Well, I think I was about 14 years old when visiting my cousin in Reynoldsburg, Ohio. There was a man flying a Bell 47 and giving rides. This may shock you because I think the rides only cost $25.00 and yea that was a lot for a young boy but, I had saved some money and I wanted to take a ride. It was the coolest feeling ever.

I remember it was like taking a ride on a cloud. He brought the helicopter to a hover and then, the nose of the aircraft nosed over and away we went climbing above everything. I remember that as a young boy I would have dreams of flying over all my friends houses but, not in a Helicopter but, by just spreading my arms out and take off running. It was everything that I had dreamed of.

It would be quit some years before I actually started taking flying lessons, but I remember buying a book on "How to Fly Helicopters" and I think I read that book over a thousands times. But, when it came to taking flying lesson in the a Hughes 269C also know as a Hughes 300 all of that reading helped everything to fall into place.

So, if you are serious about flying some day I suggest that you start reading up on books about flying, navigating and aerodynamics. There is so much to learn and you don't want to have to cram reading while you are learning to fly. Flying takes all of your concentration and then some in the beginning. But, after so time it becomes second nature.

The picture below is a 269A helicopter which I believe this one was a trainer for the US Army at one time. It is own by a man in Bremen, Ohio. A friend of mine Steve was taking flying lesson.

I hope that those of you that fly and stop by this site will share with us their flying experiences, close calls and so on.

Next time I will wright on what I learned from an experienced commercial Pilot while flying with him one day. It was valuable information and I was surprise the none of my flight instructors ever advised me of this info while I was training with them. Or perhaps that did but I was so overwhelmed with the training that I forgot about once I had obtained my pilot license and started flying on my own. 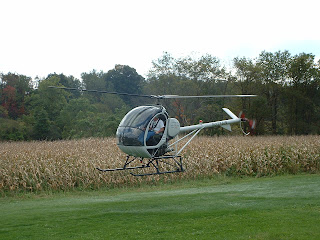 Posted by Unknown at 9:18 AM No comments:

Helping Each other find what we are looking for

Looking for information concerning your helicopter? Post a comment and one of our readers may have what you are looking for or have what you are looking for. Have a Helicopter you would like to sell? Have parts you would like to sell? Post anything and everything here! Or Send it to us and we will post it at our site
Helicopters Of America.com
Posted by Unknown at 6:21 AM No comments:

This was my first flight in this Bell 47 G. I will edit this post in the future with more details as I recall them. I was stationed at Fort Indian Town Gap, Pennsylvania. During my off time from training I was investigating near by airports and discovered this airport and they offered this Bell 47 for rent.

It was a blast and I got to auto-rotate the aircraft when we returned to land. It was sweet. Nothing like inertia from the large blades. Feel free to post your flying adventures here and share with your friends.

Just discovered that the Bell 47 is making a come back. Click Here to check out their site.


Thanks for visiting this blog.
Posted by Unknown at 2:13 AM 1 comment: